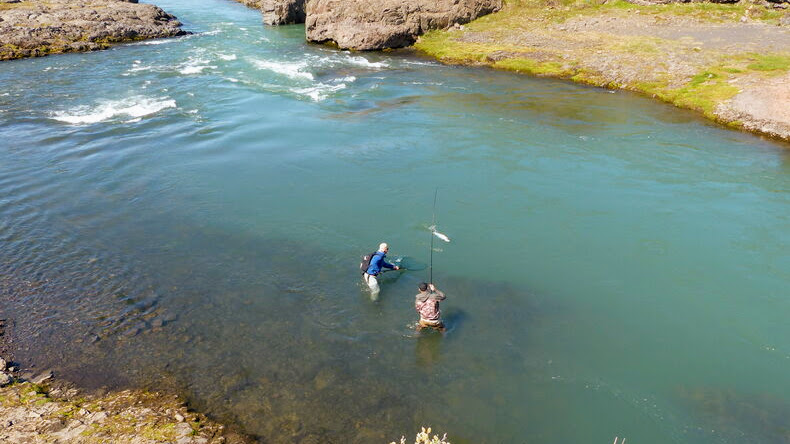 What can be fished

River Blanda is one of the best salmon rivers in the country with a strong, large salmon population. There have always been a lot of salmon in the river, but before it was dammed it was very turbid, so the salmon rarely saw the fly or bait and hooking (? – is this gaffing?) was the main fishing method. Now, people can use other methods and fly fishing is quite popular. The fishing at beat one in Blanda starts in June and it is difficult to find a salmon river, which generally returns as good a catch in June and early July. Dammurinn and Breiðan are fishing spots that give good fishing through the whole season. The river is about 125 km in length, which makes it the eighth longest in the country and the catchment area is about 2300 square kilometers.

Anglers are accommodated in the magnificent fishing lodge Hólahvarf. There are double bedrooms each with a private bathroom. The lounge is roomy and comfortable with a beautiful view over the river. On the terrace are hot tubs or it’s possible to go into a sauna if guests prefer. The lodge was recently improved to meet the requirements of the current tenant.

Accommodation and food is provided in June and July and until August 2nd. After that date, accommodation is not available with fishing permits in Blanda I, but there are numerous accommodation options in and around Blönduós.

One male fish under 68 cm may be taken per shift. After that, people can of course catch and release. In Blanda I in June there are four rods, two on each bank. At other times, 6-8 rods are used. From the opening 5th of June and until 24th of June and again from August 2nd to the end of the season, Blanda beat I is sold separately. From the 24th of June until the 2nd of August Blanda I, II and III are sold together as a package and anglers rotate between beats according to a prescribed system. Single rods are sold 2 – 4 days at a time, in June and July.

Blanda is very powerful and has fast currents, therefore we ask anglers to go carefully and use a wading stick and life jacket while fishing.

About the fishing license

Considerations about the schedule

There are no recent catches at Blanda I – II & III!