The world’s Arctic char populations are decreasing and in most places their populations sizes are declining. In Iceland and Norway, fishing statistics point to a sharp decline of the sea running Arctic char stocks. One of the clearest examples is the char stock in River Eyjafjarðará, where the catch increased steadily until the year 2001, but after that there is a complete collapse in the stock. However, the reasons for the decline in char are unclear, although there is no shortage of hypotheses.

The collapse of the char population in River Eyjafjarðará was dealt with by changing the fishing management, since 2007 the practice and killing of char was limited. The following year, a long-term study of the char population of the river was launched. Tagging and recovery of char was used to study the movement and survival in a catch and release  system, while electrofishing of fry was used to monitor the development of the river’s fry economy.

For several years it seemed that the river was recovering, but now it seems that the char population of the river is at the limit of endurance. Unfortunately, something similar is happening in other rivers in the vicinity of river Eyjafjarðará, e.g. River Hörgá and River Svarfaðardalsá.

“How and why are the numbers of sea char declining”? The main answer probably lies in the complex relationship with climate change. However, overfishing of char, net fishing in the sea, construction and gravel mining by the rivers are also told to play a role in the collapse. 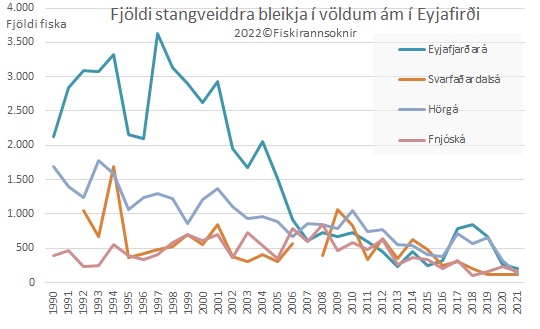 Krafla, which is known for selling Echo fishing products, recently launched a new and elegant website, krafla.is. The Echo fly rods have attracted a lot of attention and seem cheap for the quality. The fly reels are also at a great price and of good quality. Krafla.is offers well-known salmon and trout flies and has honored the fly designers Kristján Gíslason and Gylfa Kristjánsson. Most anglers know the immortals Krafla and Grímur, Iðu and Elliða and the trout flies Mýslu, Krókinn and Beyki.

Veiðitorg has been operating for several years. It offers cost effective fishing pemits for rivers in many parts of Iceland

One area that is growing in popularity is in the south part of Iceland, and is called Ölfusarós – East bank. The main fish species is sea trout and the day permit only costs 2000 isk. It has been a tradition that all profits from the sale of fishing permits go to the Rescue Squad Björg at Eyrarbakki.

In the Eastern part of Iceland, the rivers available on Veiðitorg are home to sea char. These are Selfljót, Fjarðará in Borgarfjörður and Dalsá. However, brown trout can also be found in Selfljót. Information pages about these rivers will soon be available on Veiðiheimar. Veiðitorg offers few days in the salmon river Deildará.